NTRIP (Networked Transport of RTCM via Internet Protocol) is a protocol for streaming DGNSS correction data over the internet. NTRIP capable devices can have one or more designated “NTRIP roles”, which are listed below.

The NTRIP server is a device providing DGNSS correction data to an NTRIP caster over an internet connection. It is actually not a server in the “classic” definition since it is not serving data directly to any clients.

The NTRIP client is a device which is using DGNSS correction data provided by an NTRIP caster over the internet.

The NTRIP caster itself is not generating or providing any DGNSS correction data.

NovAtel OEM628™, OEM638™ and OEM7 receiver boards (except for the OEM719™), and the receivers containing one of these receiver boards, all natively support both the NTRIP server and NTRIP client roles. NovAtel OEM6 and OEM7 boards do not have on-board NTRIP caster functionality, so a separate NTRIP caster program is always needed in order to use an OEM6 or OEM7 receiver as an NTRIP-enabled RTK base station.

Any NTRIP connectivity (server or client) requires a receiver model that supports NTRIP. For an OEM6 receiver, the 9th position in the model name should be either “N” or “R”. 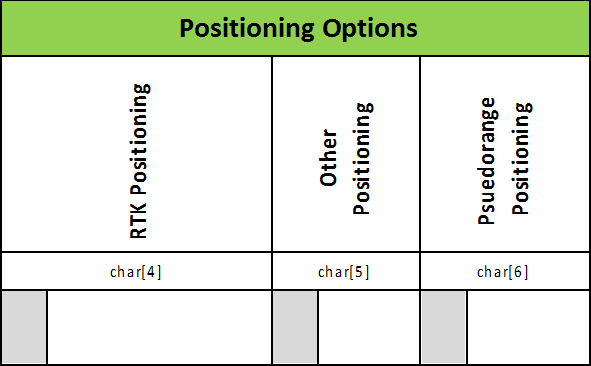 In NTRIP client mode, the receiver is able to connect to an existing NTRIP caster in order to stream DGPS or RTK correction data from the internet to the receiver. These correction data can be used by the receiver to improve the quality of its position solutions. A typical example would be connecting to an RTK network using a mobile internet connection.

Setup of the Ethernet Connection

Before the receiver can connect to the internet, the Ethernet functionality has to be enabled. This can be done by sending the following command:

The receiver will now try to obtain a DHCP-assigned IP address from the network’s DHCP server. Once the receiver has obtained a valid IP address, it is able to connect to IP addresses on the internet.

To verify the receiver has actually obtained a valid IP address, send the following command:

The receiver will respond with a message similar to the one below:

The example below will use the following data:

To establish a connection, a mount point is mandatory, but since no mount point is given, it must be requested and downloaded from the server. To do this, just send the following commands to the receiver:

The receiver will respond with a message similar to the one below:

The first command establishes the connection to the caster and requests data from the mount point “RTCM_31”.

Now that all the required information is available, the connection to the caster can be established by sending the following commands:

The first command establishes the connection to the caster and requests data from the mount point “RTCM_31”. The second command tells the receiver to handle the incoming data as RTCM version 3 correction data and not to send anything back to the NTRIP caster.

If a connection to an RTK network is made, the network usually either selects the nearest physical base station or it creates a virtual reference station for the rover’s position. In these cases, the network needs to know the position of the rover before any RTK corrections can be provided, so the rover needs to send its own position back to the network periodically, usually as an NMEA GGA message.

A connection to an RTK network can be established by sending the following commands:

This will allow the RTK network to provide the most suitable correction data to the receiver at all times.

The first command establishes the connection to the caster and requests data from the mount point “RTCM_31”. The second command tells the receiver to handle the incoming data as RTCM version 3 correction data and to send any messages back to the NTRIP caster in clear text. The third command sends the receiver’s position back to the caster once every 5 seconds. This will allow the RTK network to provide the most suitable correction data to the receiver at all times.

To verify that the receiver is actually using the incoming correction data, send one of the following commands to the receiver:

The possible replies will be similar to:

Connecting to an NTRIP Caster as an NTRIP Server

As with the NTRIP client mode, the receiver must have a working Ethernet connection and a valid IP address before the connection with the NTRIP caster can be established, see the “Setup of the Ethernet connection” section on page 5. The way to connect is very similar, but there is one big difference: most NTRIP casters will require both a user name and password for any connecting client, but they will usually only require a password for a connecting server. Furthermore, the NTRIP configuration of the receiver will specify “server” instead of “client”.

Since it would be impossible to describe in detail how to connect a NovAtel receiver as NTRIP server to every possible NTRIP caster, the two examples below will be limited to two relatively simple NTRIP caster programs that can be downloaded from the internet and used for free. Both programs feature a built-in NTRIP server as well, to connect correction streams over a serial (RS-232) connection, but the examples will only cover a connection from the receiver to the caster over a TCP/IP network. Please note that NovAtel support are not promoting the use of either caster program and that support for these programs lies solely with the manufacturer/provider of the programs. The examples below are purely to demonstrate the mechanics of connecting a NovAtel receiver as an NTRIP server to an NTRIP caster.

The two examples below will use the following data:

The Lefebure NTRIP Caster is a small and lightweight program, allowing for one serial (RS-232) connection and an “unlimited” number of TCP/IP connections. The program does have its limitations when multiple clients are connected (for more details, please see the Lefebure website at http://lefebure.com/software/ntripcaster/) and the caster port is fixed to 5000. This port number cannot be changed. 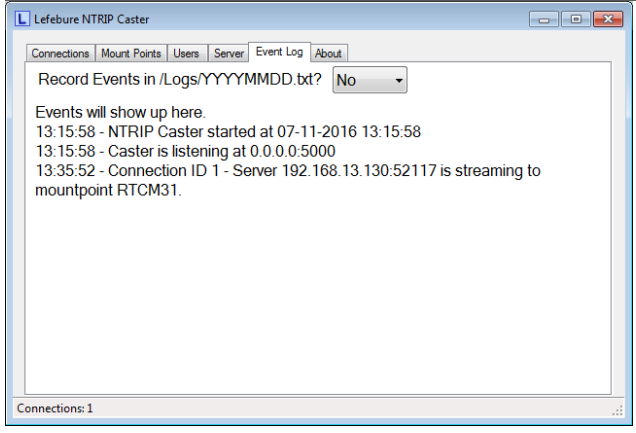 To enable users to connect to the caster once the server is connected, make sure to define at least one user on the “Users” tab (user name and password):

Lastly, verify the NTRIP caster is actually running and listening for incoming data requests by clicking the “Event Log” tab: 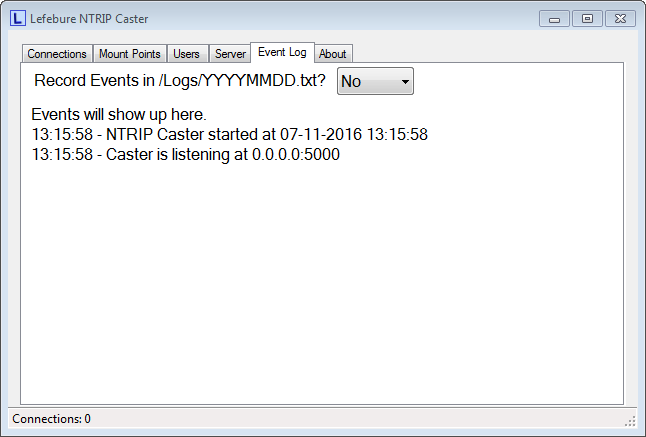 Now that the NTRIP caster program is set up correctly, the following commands sent to the NovAtel receiver will establish a connection with the caster and start streaming RTCMv3 data to the mount point called “RTCM31”:

Note the two double quotation marks in the second line to indicate a blank user name. Please provide the antenna latitude, longitude and height as accurately as possible. Any deviation from the “real” antenna position here will have a direct effect on the quality of the DGPS/RTK solution of the connected rover receivers.

To verify the NTRIP server is indeed connected to the caster, first check the Event Log tab again. Upon successful connection, an entry will be added with the IP address of the server and the name of the mount point it is streaming correction data to. 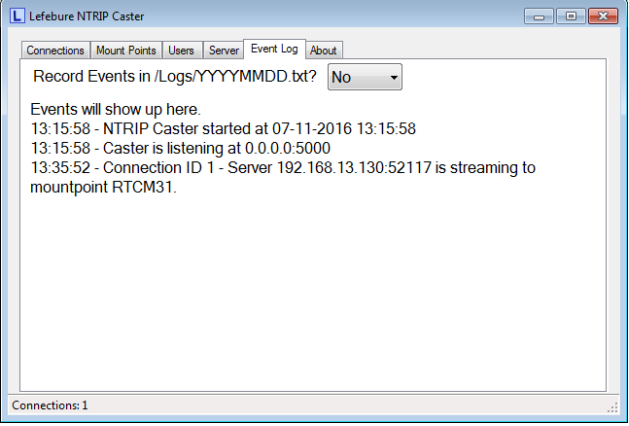 The “Connections” tab will also show the connected server(s) and connected clients (if any). A server will by default show “-SERVER-” as the user name: 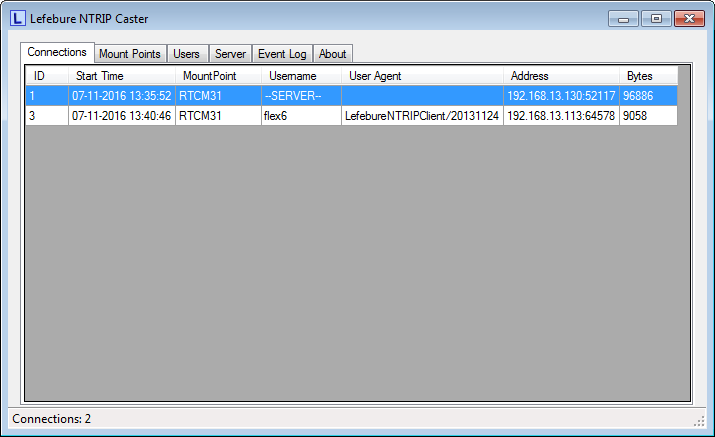 To close the connection to the caster from the server side, send the following command to the NovAtel receiver:

The SNIP NTRIP caster (www.Use-SNIP.com) has a number of configuration options and will allow a mix of serial and TCP/IP streams, up to the maximum number of input streams allowed by the registered license of the caster. The free version is limited to 3 different input streams. Both the caster port and the caster IP address (in case the computer on which the caster program runs has more than one IP address) can be selected by the user.

When a receiver is connected over a serial (RS-232) connection, the user has to define a mount point during setup of the connection. For connections over TCP/IP, the NTRIP server will define the mount point. 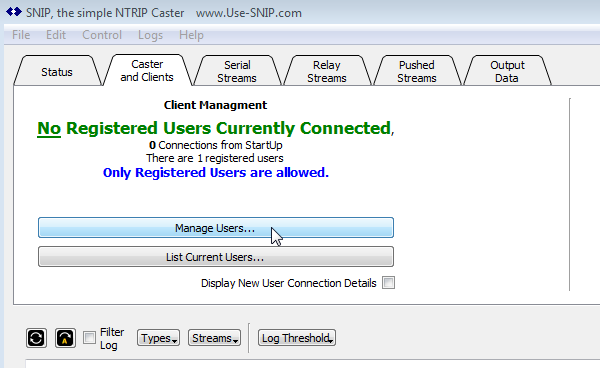 The “Registered Users” window will open. Any existing users, with passwords, along with the maximum number of simultaneous connections allowed for this user will be shown. 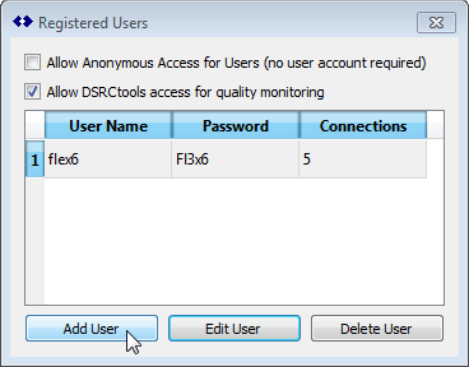 To add a new user, click the “Add User” button, enter the new user name and password and adjust the number of simultaneous connections if required, then click the “OK” button. Before closing the “Registered Users” window, make sure to unmark the “Allow Anonymous Access for Users” checkbox.

Next, check the “Caster Management” part of the Caster and Clients window. It will tell you which IP address and which caster port the caster is currently listening on. If you would like to change any of these settings, click “Disconnect”, change the IP address and/or caster port, then click “Connect”.

Make sure to note down the caster IP address and caster port, since the server needs this information to be able to connect to the caster.

Note the two double quotation marks in both “NTRIPCONFIG” lines to indicate a blank user name. Please provide the antenna latitude, longitude and height as accurately as possible. Any deviation from the “real” antenna position here will have a direct effect on the quality of the DGPS/RTK solution of the connected rover receivers. Also note that the server is connecting to the same caster port (2101) for both data streams. This is also the port to which all clients will initially connect. Once the connection has been established, the caster will negotiate and assign a different port over which the communication will be routed.

The “Pushed Streams” tab will now show the two data streams from the server to the caster:

When an NTRIP client is connected to a specific data stream, it will be shown in the “Clients” field of the data stream.

To close the connections to the caster from the server side, send the following commands to the NovAtel receiver:

A data stream that is down/dead may be forcibly closed by right clicking the mount point name and selecting “Disconnect” from the drop down menu. This will also disconnect any clients connected to this data stream.

The above examples are “simplified” examples in that both the NTRIP server and the PC which is running the NTRIP caster are both on the same network (LAN). When setting up an NTRIP caster with server(s) and/or client(s) located outside the caster network, please make sure to configure the modem/router in such a way that a built-in firewall will allow the incoming connections to the caster port and the caster port is routed (NAT/PAT) from the external IP address of the modem to the “internal” IP address of the caster.

Any servers or clients not connected to the same LAN as the NTRIP caster will have to connect to the external IP address of the modem and the modem port that has been forwarded to the caster, instead of the “internal” IP address and port of the caster directly.