Although you may already be familiar with the term “GPS” (Global Positioning System), you may not have heard the term “GNSS” (Global Navigation Satellite System), which is used to describe the collection of satellite positioning systems that are now operating or planned.

GPS (United States): GPS was the first GNSS system. GPS was launched in the late 1970s by the United States Department of Defense. It uses a constellation of 27 satellites, and provides global coverage.

GLONASS (Russia): GLONASS is operated by the Russian government. The GLONASS constellation consists of 24 satellites and provides global coverage.

Galileo (European Union): Galileo is a civil GNSS system operated by the European Global Navigation Satellite Systems Agency (GSA). Galileo will use 27 satellites with the first Full Operational Capability (FOC) satellites being launched in 2014. The full constellation is planned to be deployed by 2020.

BeiDou (China): BeiDou is the Chinese navigation satellite system. The system will consist of 35 satellites. A regional service became operational in December of 2012. BeiDou will be extended to provide global coverage by end of 2020.

IRNSS (India): The Indian Regional Navigation Satellite System (IRNSS) provides service to India and the surrounding area. The full constellation of seven satellites is planned to be deployed by 2015.

QZSS (Japan): QZSS is a regional navigation satellite system that provides service to Japan and the Asia-Oceania region. The QZSS system is planned to be deployed by 2018.

In Chapter 3, we will provide additional information about these systems. As GNSS constellations and satellites are added, we will be able to calculate position more accurately and in more and more places.

“The future ain’t what it used to be.” –Yogi Berra, former Major League Baseball player and manager. 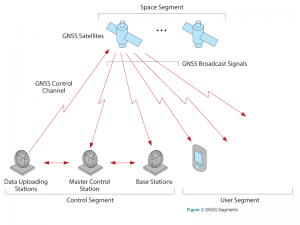 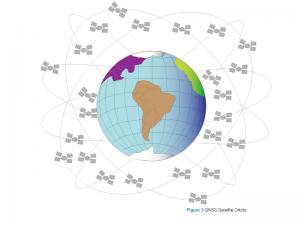 The space segment consists of GNSS satellites, orbiting about 20,000 km above the earth. Each GNSS has its own “constellation” of satellites, arranged in orbits to provide the desired coverage, as illustrated in Figure 3.

Each satellite in a GNSS constellation broadcasts a signal that identifies it and provides its time, orbit and status. To illustrate, consider the following. You are downtown. You call a friend. Your friend is not at home, so you leave a message:

Your friend returns a couple of minutes later, listens to your message and “processes” it, then calls you back and suggests you come up a slightly different way; effectively, your friend has given you an “orbit correction.”

In each GNSS system, the master control station adjusts the satellites’ orbit parameters and onboard high-precision clocks when necessary to maintain accuracy.

The user segment consists of equipment that processes the received signals from the GNSS satellites and uses them to derive and apply location and time information. The equipment ranges from smartphones and handheld receivers used by hikers, to sophisticated, specialized receivers used for highend survey and mapping applications.