GNSS radio signals are quite complex. Their frequencies are around 1.5_GHz (gigahertz)—1.5_billion cycles per second. GNSS operates at frequencies that are higher than FM radio, but lower than a microwave oven. By the time GNSS signals reach the ground, they are very, very weak. We will provide more information about how the user segment deals with this in Chapter 2.

“I have never been lost, but I will admit to being confused for several weeks.” Daniel Boone, American pioneer and hunter. 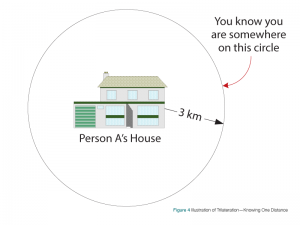 If you have a GNSS receiver, it is unlikely that you will ever be lost again. GNSS positioning is based on a process called “trilateration.” Simply put, if you don’t know your position, but do know your distance from three known points, you can trilaterate your location. 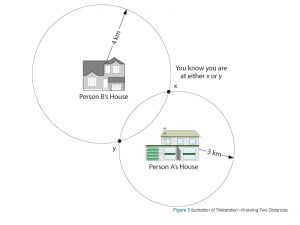 But if you also know that you are 4 km from Person B’s house, you will have a much better idea of where you are, since only two places (x and y) exist on both circles, as shown in Figure 5.

With a third distance, you can only be in one physical location. If you are 6 km from Person C’s house, you have to be at position x since this is the only location where all three circles (distances) meet.

In Chapter 2, we will show you how the technique of trilateration is extended to GNSS. Conceptually, we are just going to extend the above example by replacing the houses with satellites. And for reasons that we will outline, we will replace the three houses with four satellites. 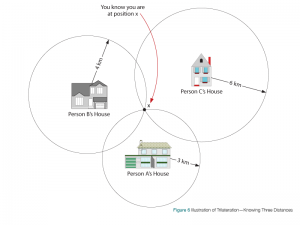