For many applications, such as airborne survey, corrected GNSS positions are not required in real-time. For these applications, raw GNSS satellite measurements are collected and stored for processing post-mission. Unlike RTK GNSS positioning, post-processing does not require real-time transmission of differential correction messages. This simplifies the hardware configuration greatly.

During post-processing, base station data can be used from one or more GNSS receivers. Multi-base processing helps preserve high accuracy over large project areas, which is a common occurrence for aerial applications. Depending on the project’s proximity to a permanently operating GNSS network, base station data can often be freely downloaded, eliminating the need for establishing your own base station(s). Moreover, it is possible to process without any base station data through PPP, which utilizes downloaded precise clock and ephemeris data. 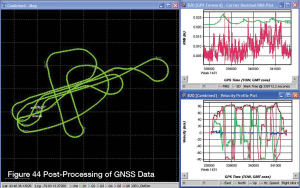 In the example shown in Figure 44, the route taken by the vehicle is shown in the left side of the screen, and measurements recorded during the mission, such as velocity, resolved into horizontal and vertical components, are shown in the right side.

Post-processing generally results in a more accurate, comprehensive solution than is possible in real-time. 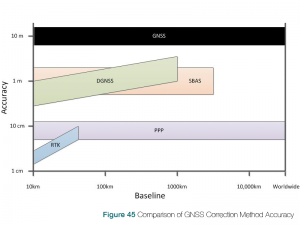 The configuration of Differential GNSS (DGNSS) and RTK systems are similar in that both methods require a base station receiver setup at a known location, a rover receiver that gets corrections from the base station and a communication link between the two receivers. The difference is that RTK (a carrier phase method) is significantly more accurate than DGNSS (a code-based method).

The advantage of DGNSS is that it is useful over a longer baseline (distance between base station and rover receivers) and a DGNSS system is less expensive. The technology required to achieve the higher accuracy of RTK performance makes the cost of a RTK-capable receiver higher than one that is DGNSS-capable only.

The advantage of SBAS systems is that the corrections services are free for everyone to use. While the private corrections services provide higher quality corrections and are available world wide, a paid subscription is required to access the signals. Also, since SBAS is a code-based method, there are no ambiguities to resolve and full SBAS accuracy is available almost immediately. PPP systems require time to converge (resolve ambiguities) before full accuracy is available.

While the accuracy of DGNSS and SBAS are similar, the equipment required for the systems is different.

Like DGNSS and SBAS, RTK and PPP offer similar accuracies, but the equipment and setup required is different.

An RTK system offers higher accuracy and quick initialization, but is more complex to setup and more expensive. The RTK system requires at least two RTK capable receivers (one base station and one or more rovers), a GNSS antenna for each receiver and a communication link between the receivers. Also, to achieve the high level of accuracy, the base station must be very precisely set up at a known location.

A PPP system has a simpler configuration; a single PPP compatible receiver, an antenna capable of receiving GNSS and L-Band frequencies and a subscription to a corrections service provider. However, PPP has a somewhat lower accuracy and longer initial convergence time.

This chapter has described, at a high level, some very complex GNSS concepts. If you want to learn more about these, we have provided a list of references at the end of the book.