The positioning technique described in Chapter 2 is referred to as a code-based technique because the receiver correlates with and uses the Pseudorandom Noise (PRN) codes transmitted by four or more satellites to determine its position and time. This results in positioning accuracies of a few metres. For some applications, such as surveying, higher accuracies are required. Carrier-based techniques such as Real-Time Kinematic (RTK) and Precise Point Positioning (PPP) have been developed that can provide positions that are orders of magnitude more accurate than code-based GNSS.

A. Phase modulation of the carrier wave using the PRN code is used to differentiate satellite signals and to provide signal timing information for range measurements.

B. Measurements based on the PRN modulation are unambiguous, but precision is limited to sub-metre.

C. The carrier wave for the GNSS signal is a sine wave with a period of less than one metre (19 cm for L1), allowing for more precise measurements.

D. Measurements of the phase of the carrier wave can be made to millimetre precision, but the measurement is ambiguous because the total number of cycles between satellite and receiver is unknown.

Resolving or estimating the carrier phase ambiguities is the key to achieving precise positioning with RTK or PPP. The two methods use different techniques to achieve this but both make use of:

Therefore, the method employed by the receiver, code or carrier based measurements, impacts the positioning performance.

A commonly used technique for improving GNSS performance is differential GNSS, which is illustrated in Figure 40.

In differential GNSS, the position of a fixed GNSS receiver, referred to as a base station, is determined to a high degree of accuracy using conventional surveying techniques. Then, the base station determines ranges to the GNSS satellites in view using:

The base station compares the surveyed position to the position calculated from the satellite ranges. Differences between the positions can be attributed to satellite ephemeris and clock errors, but mostly to errors associated with atmospheric delay. The base station sends these errors to other receivers (rovers), which incorporate the corrections into their position calculations. 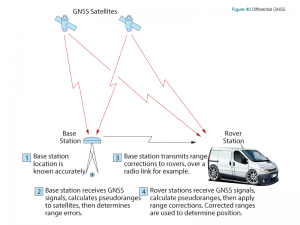 Since GNSS satellites orbit high above the earth, the propagation paths from the satellites to the base stations and rovers pass through similar atmospheric conditions, as long as the base station and rovers are not too far apart. Differential GNSS works very well with basestation-to-rover separations of up to tens of kilometres.